Chances are you’ve enjoyed Hershey’s chocolate since you were a child, but have you ever stopped and wondered, “What is Hershey’s chocolate made of?” No? Well, kids never had to worry about that anyway. Now that we’re adults questioning how to boost a metabolism, we’re more interested in Hershey’s Kisses calories. Something so sweet can’t be good for you, can it? Well, wonder no more! This is your in-depth guide to Hershey’s ingredients, where they come from, and how many miles you need to walk to burn them off.

What is Hershey’s Chocolate made of?

Hershey’s chocolate is made from cacao beans, milk, sugar, and cocoa butter, but the actual chocolate-making process begins long before that. In fact, it’s a fascinating but labor-intensive process that will make you appreciate every sweet bite.

Cacao trees bear fruit, and inside those fruits are seeds. Farmers remove the seeds, letting them ferment and then dry before roasting them for flavor — just like coffee beans. The roasting process also makes it easier to remove the shell, leaving the nib behind. These nibs are what will eventually become chocolate.

Hershey’s ground the nibs before adding milk (if it’s milk chocolate), cocoa butter, and sugar and blending it together until it forms a thick, cake batter-like substance called chocolate crumb. The crumb is rolled and refined until it forms a very fine powder. Next comes the conching process, which involves adding more cocoa butter to the chocolate crumb until it reaches the texture of melted chocolate. Workers then transfer the chocolate to a molding machine, and, well, you know the rest! 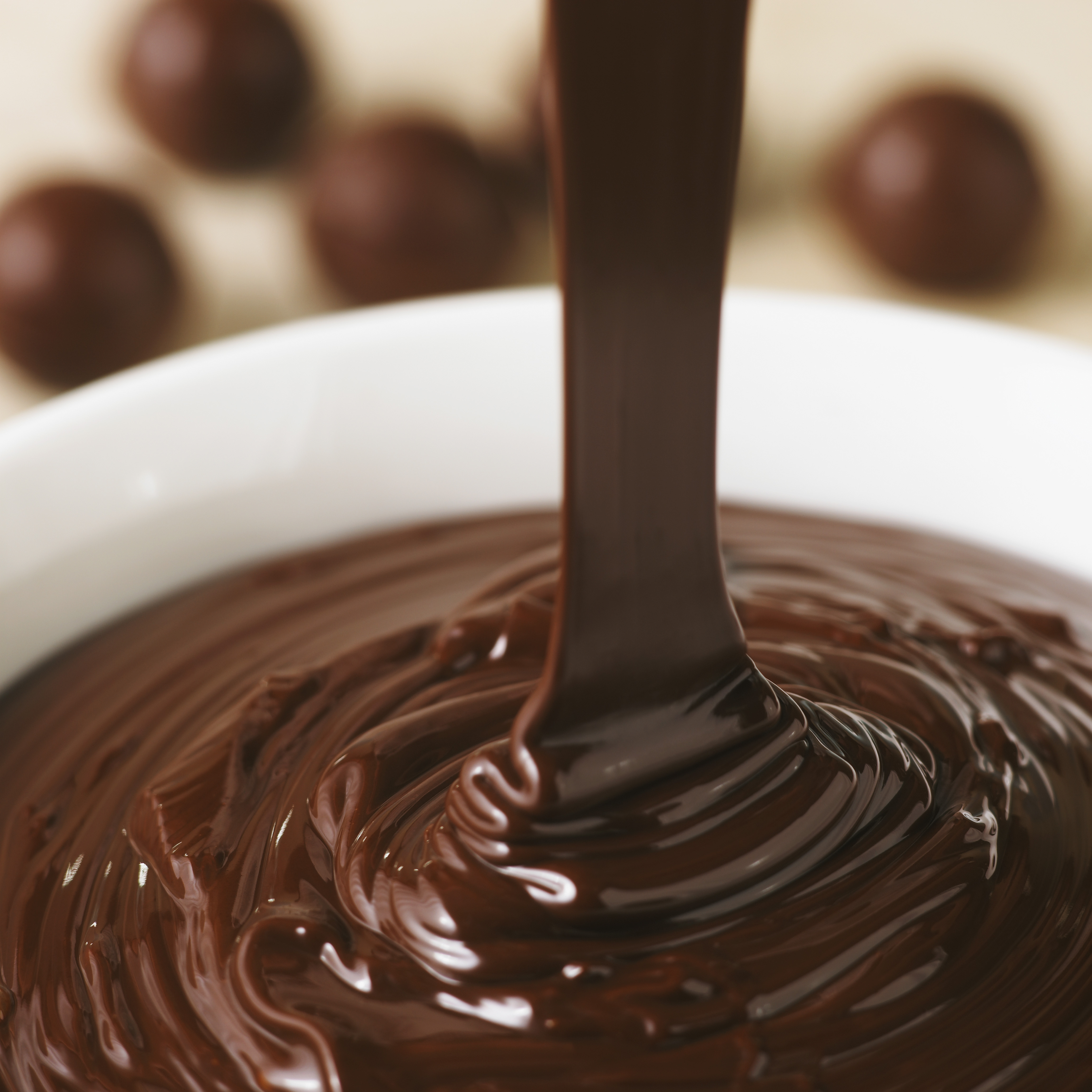 In 2015, Hershey’s made headlines for pledging to go all-natural. With the consumer push for more transparency in ingredients, the Pennsylvania-based company joined the ranks of companies like General Mills, Kellogg’s, and Campbell’s that promised to replace artificial ingredients with real ones. Late that year, Hershey’s quietly rolled out chocolate without artificial vanilla flavor — called vanillin — in its Kisses and bars. Please tell us we weren’t the only ones who didn’t notice the change!

According to their website, Hershey’s sources their ingredients locally when they can. Their milk comes from dairy farms within a 100-male radius of their facilities, and the almonds they buy are grown in California. Even the sugar comes from plantations in the southern U.S. If you ask us, supporting American jobs is the perfect excuse to have another chocolate square!

OK, but really, how many calories are in a Hershey Kiss?

According to the nutrition facts — we’ll spare you the math —a Hershey’s Kiss calorie count is roughly 22 calories per piece. To put that in perspective, a cup of bell peppers has about 30 calories, 10 small strawberries is 20 calories, and an ounce of wine is about 24 calories. While Hersey’s Kisses would usually win out over a portion of fruits or veggies, it’s a toss-up regarding whether we’d go for the wine or the chocolate. We won’t judge if you decide to go with both!

But who actually holds herself to only one Hershey’s Kiss? Let’s say you eat five kisses; that adds up to roughly 110 calories total. Sure, it doesn’t have the same nutritional benefits as a rice cake with almond butter or some veggie sticks and hummus, but it’s not that bad either. And one thing is for sure: The chocolate certainly tastes better.

Now that I’ve gone and eaten the chocolate, how many steps burn 100 calories?

Assuming you really only ate five Hershey’s Kisses, just 20 minutes of walking should do the trick. And given all the benefits of walking — a 2017 study found that menopausal women who walked one hour per day three days per week saw a reduction in their menopause symptoms and rates of depression — you’ll not only look but also feel great.

If you couldn’t resist and helped yourself to a five more kisses (remember, we’re not judging!), you can easily burn 200 calories in a 20-minute Zumba class. If you’re not into high-intensity workouts, a leisurely stroll around the grocery store will burn 200 calories — yes, really!

Forget Kisses! How many calories are in a Hershey’s chocolate bar?

If you’d rather not waste time opening five kisses, a Hershey’s chocolate bar is the way to go. Calorie counts vary depending on which flavor bar you choose, but if you go with the classic, a Hershey’s milk chocolate bar has 220 calories

According to Health, a 37-minute dance party is enough to erase those 220 calories. A tango with the vacuum cleaner will kill two birds with one stone; you’ll have a clean house and a slim waist. If you spend eight hours in the office, a 30-minute walk up and down the stairs is another option for burning those calories.

So, now that you know your chocolate is all-natural, and you’ve learned easy ways to burn calories after indulging in a few sweets, what’s stopping you from ripping open that bag of Hershey’s? You know you want to!

‘Ruby’ Chocolate Exists and It’s Almost Too Pretty to Eat

Recipes to Try If You Go Nuts for Nutella