Julie Hayes, a mom and relocation consultant, lives in Colorado Springs, CO. She shared her story exclusively with FirstforWomen.com.

No one in my family or my husband’s has a history of diabetes, yet my oldest daughter, who’s now 19, is the only one of my kids who doesn’t have this disease. The other four–my son, McGuire, 17; my middle child, Melanie, 15; and the twins, Ashley and Emily, 14–were all diagnosed with type 1 at different ages. And every time the news came, I was devastated all over again.

When you have diabetes, your pancreas stops making insulin, which regulates your body’s blood sugar. You have to do what a healthy body does naturally, which is control your glucose levels and keep them in the target range by watching what you eat and using a pump or a shot to give yourself insulin. For kids, the target is between 80 and 180. If it’s too high, you become sweaty and short of breath, and you can go into a coma. Too low, you’re lethargic and shaky, and you can have a seizure. I’ve told my kids a million times, “If I could somehow take this away from you, and just give it to me, I would have done it hands over fists 100 times.”

The first to be diagnosed was Ashley, when she was 3. We’d all been recovering from a stomach flu, but she wasn’t getting better. She was eating and eating and eating, but it seemed like nothing was actually getting into her body. She was lethargic, sleeping for 12 hours, yet not wanting to get up in the morning.

So I took her into her pediatrician, but after looking her over and finding nothing wrong, the doctor sent us home. Two days later, Ashley seemed worse. So I took her back to the pediatrician without waiting for an appointment and discovered she’d lost three pounds in two days. At that point the pediatrician said, “We’re going to run some tests but it’s Thursday, so we won’t get the results back until Monday.” “I can’t wait,” I told the doctor. “Something is wrong and I need to know what it is.”

I took Ashley to the ER. After examining her, the doctor called the nurse so they could poke her finger to see what her blood sugar level was. It was 894. The doctor was amazed she wasn’t in a coma. She was rushed to the children’s hospital and she ended up staying there for four days.

When we got home, I threw out everything with sugar in it. Dinnertime became this carb-counting education for everybody since too many carbohydrates can cause blood sugar to spike.

Ashley didn’t adjust well at all. She had to get a shot of insulin before she ate. We had to poke her finger eight times a day to find out her blood-sugar levels. She felt singled out and alone. Plus, she was 3.

It was difficult for my husband and me too. Everything you know about taking care of your child is turned upside down; you feel you have to start over. For example, when your kid is that small and has diabetes, you cannot assume that every meltdown is just a routine temper tantrum. You don’t know if your kid is throwing a fit because her blood sugar is high or low or just because she wants a toy.

Eleven months later her twin sister, Emily, was diagnosed. Hers may have been the easiest to take, because she and Ashley are identical twins, and the doctor said it was probably–not for certain–but probably going to affect her because they had the same DNA. So we did think it was just a matter of time.

It completely changed Ashley’s life. Now she had her twin sister, her best friend, her ally in diabetes. And instead of my chasing Ashley and holding her down to give her a shot before dinner, she and Emily would fight to go first. It completely changed the dynamics of diabetes in our house. And we already knew what we were doing. We knew how to count carbs, we knew how to do insulin shots. 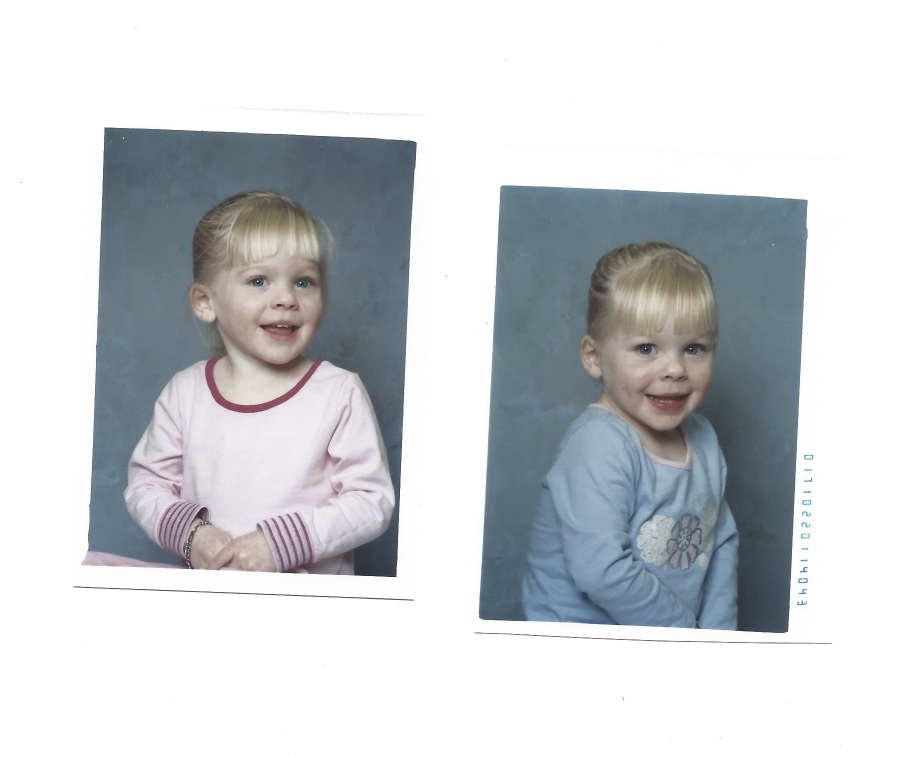 For seven years it was just Emily and Ashley, so we thought it was a twin thing. Then when she was 11, my daughter Melanie started getting up in the middle of the night to pee. I told myself, this is a sign of diabetes, but just as quickly told myself, “There is no way another one of your kids has it.”

But after a few nights of this, I poked her finger to test her blood sugar. It was 377. My best friend came over to sit with me. I was in utter shock. I never thought it would touch my other kids. And your heart breaks again for that child. It was also a rougher road for a child who has lived 11 years without diabetes to remember to test her blood sugar and count her carbs, and not ignore diabetes totally.

Then three years ago, my son McGuire was diagnosed at 14. He came into the kitchen one day before school and said, “Mom, I feel faint. I got up twice last night to pee while I was sleeping.” I handed him a test kit, and the whole time I was thinking, “No, please no, please no.” His blood sugar was 150-something. My husband came downstairs then and we all sat there and cried. There’s not a whole lot you can do, right? We were so shocked to have that many kids with diabetes–especially when you thought you were out of the woods.

When we called the doctor, the director of pediatric services at the University of Colorado’s Barbara Davis Center for Childhood Diabetes, he said we were the family with the most number of kids with type 1 diabetes at the center–and that’s all they do, childhood diabetes. When we told my daughters after they’d come home from school, they all cried. I asked my eldest daughter then if she wanted to be tested. And she said, “No, I don’t want to know. I’m going to live my life without diabetes for as long as I can.”

One recent September morning, Emily wouldn’t wake up. When I finally got her up and gave her juice to raise her blood sugar, she immediately went into a seizure. It was the scariest thing I’ve ever experienced in my entire life. I thought I was going to lose her–she was blue.

That’s when I started getting up every two hours a night to check all four of them. I’d set my alarm, then go into each of their rooms to prick their fingers to check their blood levels so they wouldn’t get too low. I was so scared because of what happened to Emily. It could happen to any one of the four.

I did that for a month while I was looking into sensors–a device that you wear on your body that continually monitors your blood sugar. Now each of them has a small Dexcom sensor, which sends their blood sugar numbers to their phones and mine. The sensor is so accurate they only have to test twice a day now. With the sensors they can gauge when to give themselves the insulin they need through a pump to avoid blood sugar spikes. And if they don’t do it, I can remind them just by looking at their numbers on a phone dashboard. 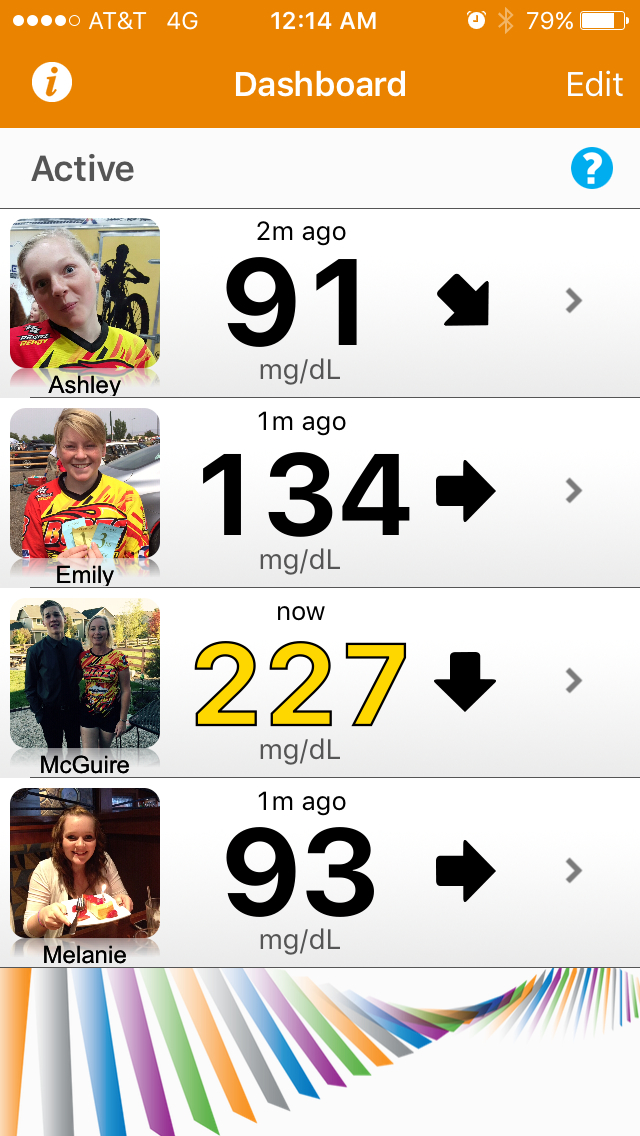 The sensors and insulin pumps have made the day-to-day logistics easier. But I still worry whether they are taking care of themselves. Because obviously as a parent I want them to be here longer than I am. I’m lucky I have good kids, but they can do things to spite you, like “I’m not going to take care of my diabetes because I am mad at my mom.”

I choose my battles carefully now. I won’t fight with my son about his room being clean, for example, but rather I save my nagging time for the things that are really important. Diabetes first. And school. And that goes for all of them.

Having even one child with diabetes is gut-wrenching, heartbreaking, and hard. But I think the biggest thing I can say to a parent is that you can do it. Your child can do it. You can live a full life.