If you’re still daydreaming about the royal wedding like us, then the official royal wedding portraits, captured by the talented Alexi Lumbroski, will be like opening a belated birthday present. The first of three photos, taken in the Green Drawing Room at Windsor Castle immediately after the royal couple’s magical carriage procession, shows the lovebirds posing with their bridesmaids and pageboys, while the second adds the bride and groom’s family — the Prince of Wales Charles, the Duchess of Cornwall Camilla, Queen Elizabeth, the Duke of Edinburgh Philip, best man Prince William, and his wife Kate Middleton, and Meghan’s proud mother, Doria Ragland. The final photo (and our personal favorite), shows the new Duke and Duchess of Sussex solo as they bask in all their newly-wedded bliss on the East Terrace of Windsor Castle.

So while you were drooling over the stunning new album, here are seven things you may totally have missed after being blindsided by the “power of love” (thank you Pastor Curry, we’re going to be quoting you for years to come).

The Duke and Duchess of Sussex have released three official photographs from their Wedding day. This photograph was taken by photographer @alexilubomirski in The Green Drawing Room of Windsor Castle, following the carriage procession #RoyalWedding

1. There’s a nod to Princess Diana. 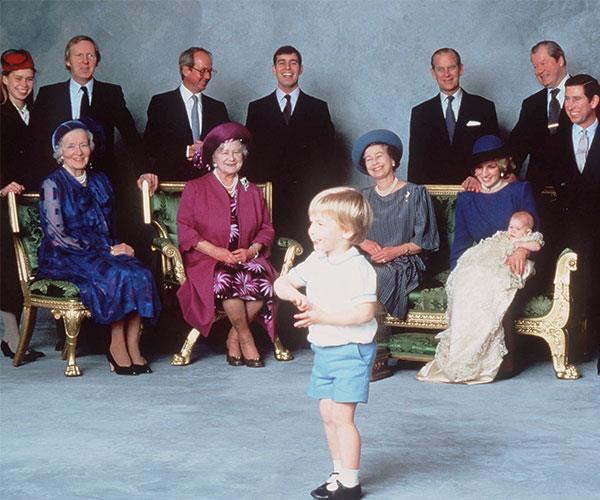 Princess Diana was never far from our minds throughout their wedding day, with the couple paying tribute to the late royal in many ways. Even for their official wedding snaps, there was a nod to Prince Harry’s late mother. The group posed on Diana’s vintage green couch, which was also used for the portraits at Prince Harry’s christening in 1983. 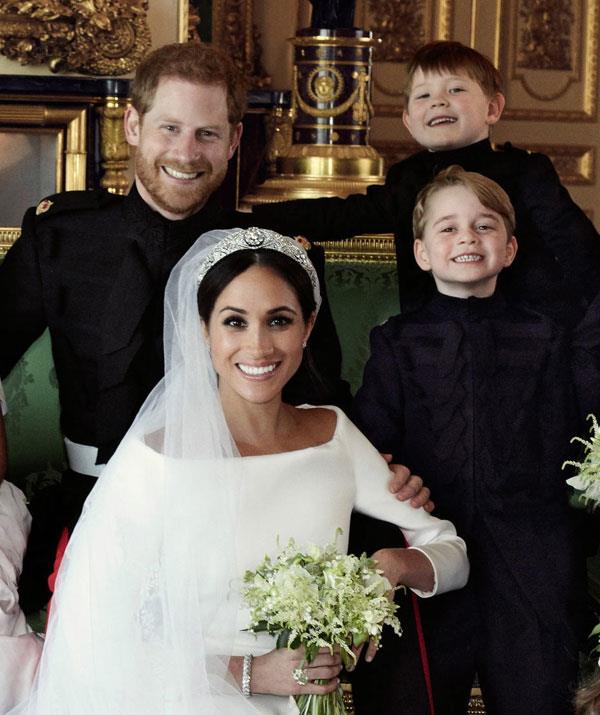 Prince George might have been a little bit shy during the ceremony, but behind the scenes, the young prince was the star of the show. In the heartwarming candid photo with just their mini bridal party, Prince George flashes that world-famous cheeky grin as he stands beside his new aunt, The Duchess of Sussex. Standing behind George is pageboy Jasper Dyer, who sweetly has his arm wrapped around the beaming groom. It’s also worth noting Prince Harry has placed a loving hand on Meghan Markle’s arm.

3. Doria Ragland has a very special spot front and center. 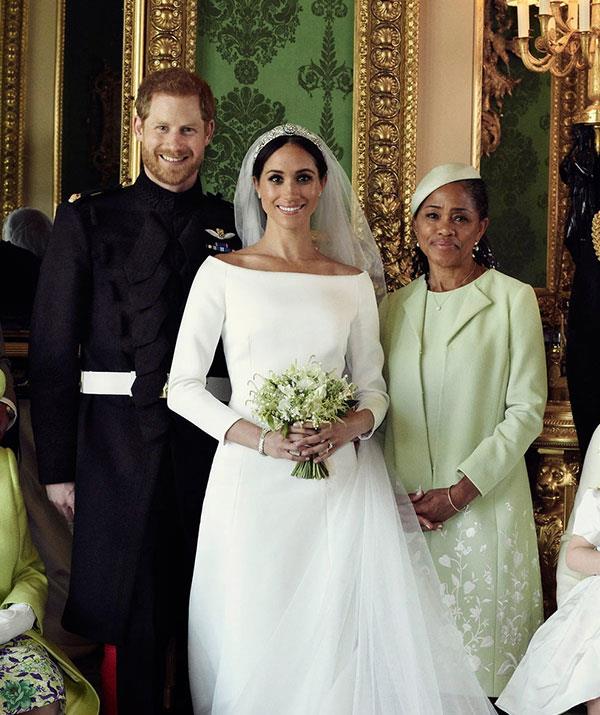 As the sole member of Meghan Markle’s family to attend, Doria Ragland has been praised for handling the entire day with grace, poise, and dignity. After Thomas Markle pulled out of the royal wedding, Doria was the only family member from Meghan’s side to attend the event and fans applauded the yoga instructor for her poised and independent stance, an inspiring symbol for single parents around the world. The mother of the bride was given prime position next to her daughter, who she calls “flower,” for the official wedding portraits. As she stands alongside Meghan, their unbreakable bond is easy to see with the pair’s arms gently resting alongside one another. It’s a clear indication that Doria Ragland is going to be next to Meghan every step of the way during her life as a working royal.

4. Duchess Catherine and Princess Charlotte shared a special mommy and me moment. 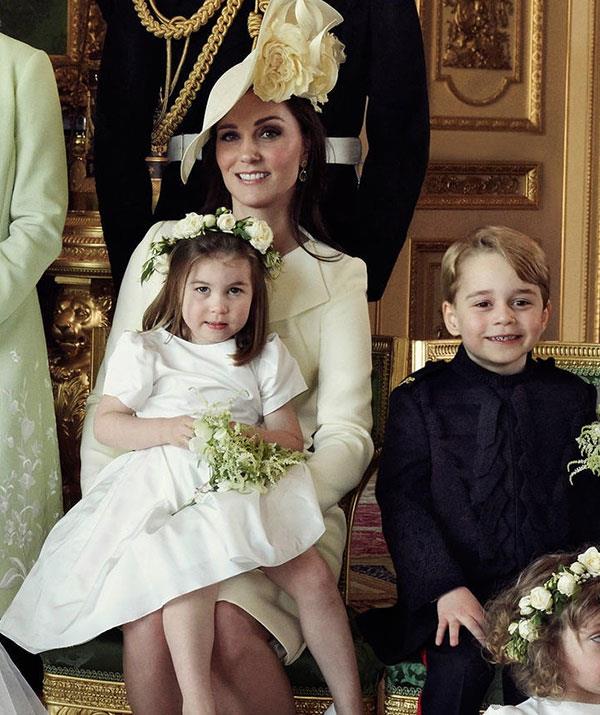 Duchess Kate Middleton might be the future Queen of England but on Prince Harry and Meghan Markle’s wedding day, her title was head child wrangler — and she did a marvelous job with the ten pageboys and flower girls on their best behavior. Departing from the more formal approach to royal wedding photos, Princess Charlotte sits on her mother’s knee and enjoys a moment of rest. 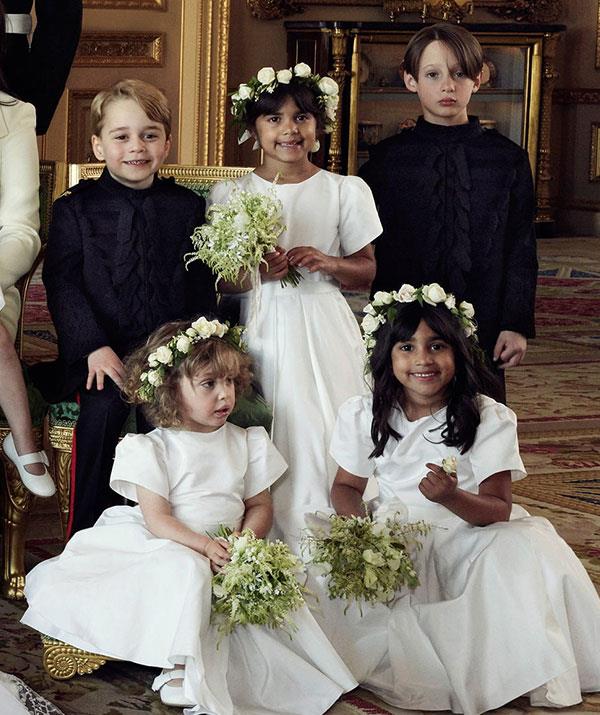 Ask any photographer, and the biggest challenge they’ll always encounter is getting kids to look directly into the camera. As the youngest flower girl, you can hardly blame two-year-old Zalie Warren, who is Harry’s goddaughter and the daughter of Zoe and Jake Warren, for gazing off into the distance. Nine out of ten kids looking at the camera isn’t bad!

6. Meghan showed off her second hairstyle.

If you’re going to have a costume change (we’re still swooning over that Stella McCartney wedding reception number), you should mix up your locks, right? Meghan Markle’s wedding day bun broke with tradition and proved that not all princesses have to be polished to perfection. The casual, loose style just made us love her even more. For the family photos and bridal party sitting, you’ll notice Meghan has swept back her stray strands.

But in the portrait with just Prince Harry, the Duchess of Sussex has pulled out a few more strands and her veil is removed to reveal her wedding day hair in all its glory. Celeb hairstylist Serge Normant is the man behind the look and revealed it took much quicker than you’d think. “We had to blow dry [her hair] from wet, I would say 45 minutes to an hour,” he explained. “Then they did the make-up and then you fiddle around with it a little bit. But it’s not that long. I always tend to try and go as fast as I can at these events. Nobody wants to sit around. It’s a messy bun, we call it. Messy in a controlled way. I don’t overload the hair with products in general and certainly not on this day.”

The Duke and Duchess of Sussex would like to thank everyone who took part in the celebrations of their wedding on Saturday. They feel so lucky to have been able to share their day with all those gathered in Windsor and also all those who watched the wedding on television across the UK, Commonwealth, and around the world #RoyalWedding

7. The chemistry is sizzling.

Picking the same photographer who captured their groundbreaking engagement shoot, we knew these wedding photos would be filled with romance and chemistry. And fans were quick to point out just how flirty Meghan Markle and Prince Harry look in the stunning black-and-white photograph. It’s unlike any other royal wedding portrait in history and continues to set the high-octane Hollywood glamour of their romance.