The Roseanne cast is back together again — and we couldn’t be more excited! On Tuesday, November 28, Roseanne Barr revealed that Johnny Galecki is returning to the show for the upcoming reboot.

“We have got our Johnny Galecki back on ‘Roseanne’ this episode – what a joy to work with such a deeply empathetic actor,” she wrote. “Very moving 4 all of us. #JOY.” Rumors were swirling that Johnny will come back as Darlene’s husband, David Healy.

This news comes just a few weeks after the beloved series’ stars, Roseanne, John Goodman, Laurie Metcalf, and more reunited at the first table read. The fun event occurred just one day before the 29th anniversary of the show, which originally ran for nine seasons from 1998 until 1997. In several photos shared by ABC, original actors Roseanne (Roseanne Conner), John (Dan Conner), Laurie (Jackie Harris), Sara Gilbert (Darlene Conner-Healy), Michael Fishman (D.J. Conner), Lecy Goranson (Becky Conner), and Sarah Chalke (Becky Conner in later seasons) can be seen reading the script for the first episode — titled “Twenty Years to Life” — of the eight-episode revival, which is set to air in 2018.

In recent months, much of the original cast has spoken out about the upcoming reboot show. “What we’ve heard from Roseanne is she’s very excited about the show,” ABC President Channing Dungey previously said. Thank goodness she’s returning — I mean, would the show even be called Roseanne without her? In some of the most shocking revival news, John’s character Dan — who died in the 1997 series finale — is coming back, too. In a previous interview, John shared how he thinks the writers will address that. “I don’t know,” he told ABC News. “I think they’re just going to ignore it.” He added, “There might be a funny reference to it.” 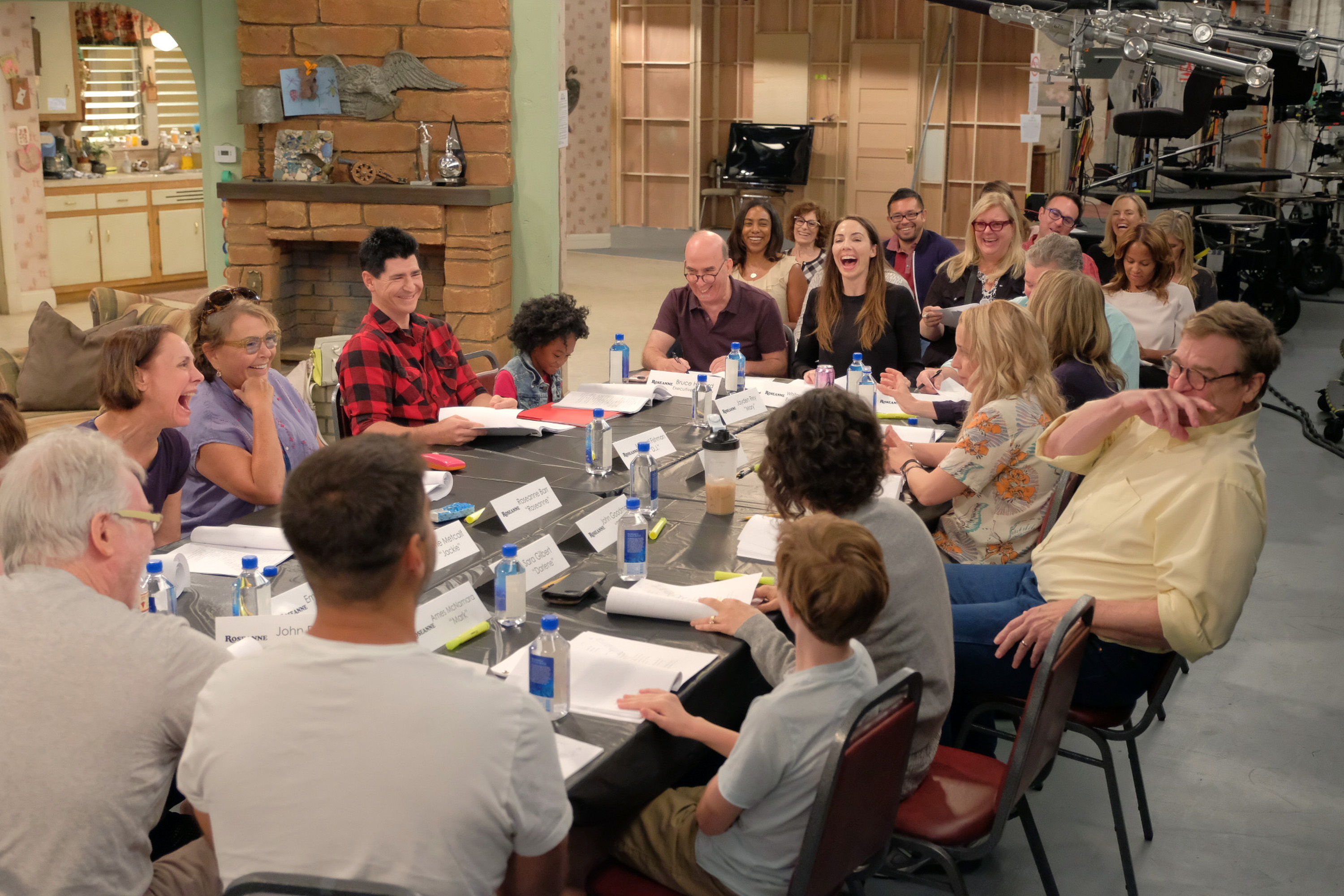 The ‘Roseanne’ cast at the table read. (Photo Credit: ABC)

In addition to your favorite sitcom couple, we’ve also learned that stars Michael, Sara, Lecy, and Laurie, will all reprise their original Roseanne roles. Sarah will additionally appear in the reboot, but in a different role since the original Becky is coming back, too. At this time, the details of her role are unknown.

During another previous interview, Sara revealed the cast gave some input on their characters’ storylines for the reboot. “I don’t think that an actor’s voice is going to trump a writer or anything like that, but we have been putting together the Roseanne reboot [and] we went to all the actors and said ‘Where do you think your character is?'” she said. “Now, nobody had, like, a major diva moment, like, ‘My character has to be this, or has to be that,’ and ultimately it will be in the writers’ hands, but I think it’s so valuable, no one does know their character as well as the people who play them, in a certain way.”

And, according to a recent Fox News report, the new show will additionally feature a “gender creative” character in the new cast. Allegedly, Darlene and David’s nine-year-old son, Mark, will be portrayed as “sensitive” and “effeminate” and having “qualities of both male and female young child traits.” We can’t wait to watch this crew back in action again next year!

Why Did the Original Becky Leave ‘Roseanne’? Get the Details!