One of the hardest parts of losing weight is giving up the delicious foods that bring you comfort. But of Tracey Topping of Northampton, England, has learned, you actually don’t need to give it all up in order to achieve the body and lifestyle you deserve.

As a child, Topping says she could eat whatever she wanted without gaining weight. But after she had four children, her weight ballooned — and she was in pain.

“I struggled to do anything,” Topping says. “At my heaviest, I had pains in my knees and ankles, I got out of breath easily, and I couldn’t work. I was at a real low. I lost touch with all my friends because I wouldn’t go anywhere. They’d invite me, and I’d say no.” 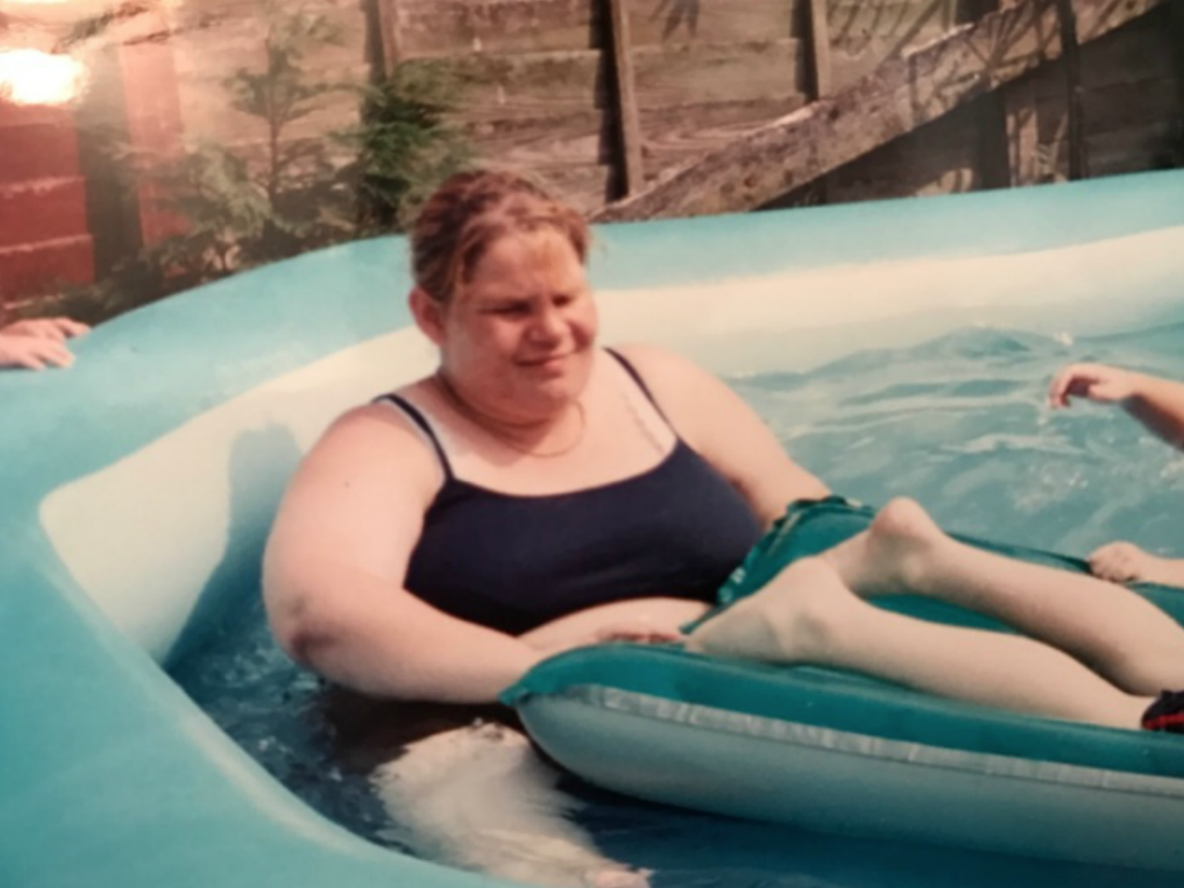 A series of embarrassing incidents were the triggers that helped Topping realize she needed a change. It started when her family went on vacation and she couldn’t keep up with her husband and kids.

“They were enjoying family walks and other fun activities, and I could only watch from the sidelines,” she says. “I couldn’t walk; my feet and ankles were too swollen. Then, there was a meeting at my son’s school, and as I took my seat, a man in the row behind me turned around and said, ‘I’ve gotta move now, I can’t see,’ after I sat down in front of him. I was mortified.”

Weight-Loss Success Happens One Bite at a Time

That’s when Topping and her husband decided to visit their local branch of Slimming World, a “food optimizing program” that teaches people how to eat in a way that keeps them satisfied. The plan allows unlimited amounts of “free foods,” a mix of healthy extras, and a sprinkling of favorite treats — a system that really worked for Topping, who was used to eating takeout food three or four times a week and snacking all day long with no accountability.

“At first it was difficult, but the food recipe books and recipes they have online are really easy,” says Topping, who began paying more attention at the grocery store and making more of an effort to plan her meals for the week ahead of time. With the support of her family, she also set about learning to cook a variety of healthier dishes — without giving up on family favorites — and measuring portion sizes.

“We all like the lasagna recipe,” she said, “but we tried everything and anything. There’s a meal called Diet Coke chicken; there’s a Bolognese and a risotto. It’s all on the plan; we can have whatever we want.”

As her eating habits improved, she also began leaving the house more, squeezing in extra steps to burn more calories and help her body get into shape. Progress was slow and steady, but as she stuck to her eating plan and joined a gym, the weight began to melt off. Just a week shy of two years after she and her husband walked in the door at their local Slimming World, Topping had dropped 250 pounds — and she’s never felt better. 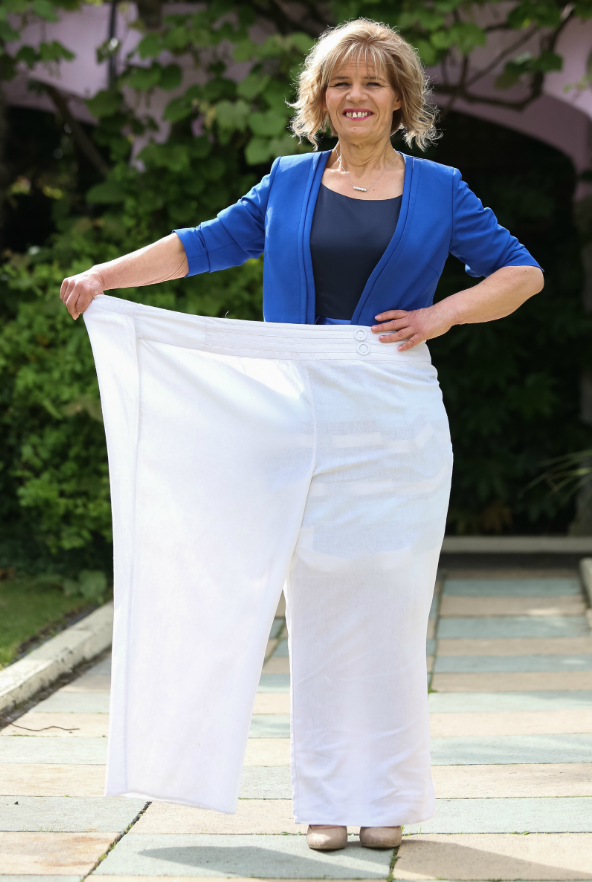 Standing in a pair of her old pants. (Photo Credit: Slimming World)

“Now, I have two jobs. I’m very active, I’m going to the gym, and I’m out walking my dogs. I’m never sitting now; I’m always out,” says Topping, who reports that her husband also lost about 70 pounds on the Slimming World plan.

“He tells everyone about [the plan]. Our relationship is the same, but I’m a lot happier now,” she says. “I’m more comfortable; I feel like i can conquer the world. Before, I had lost all my confidence, but now I feel like I’m the same as everybody else.”

The supportive atmosphere at her Slimming World group boosted her confidence immensely, and she was able to reconnect with some of the old friends she’d fallen out of touch with. Better yet, she also made loads of new friends.

“I don’t just love the new slim me. I love the new happier me, the new positive me, the new energetic me,” says Topping, who was named Slimming World’s “Greatest Loser” in 2017. “I’ve done a 10K run, I can walk for miles, and I love playing with my grandchildren. I feel like I can overcome anything life throws at me now.” 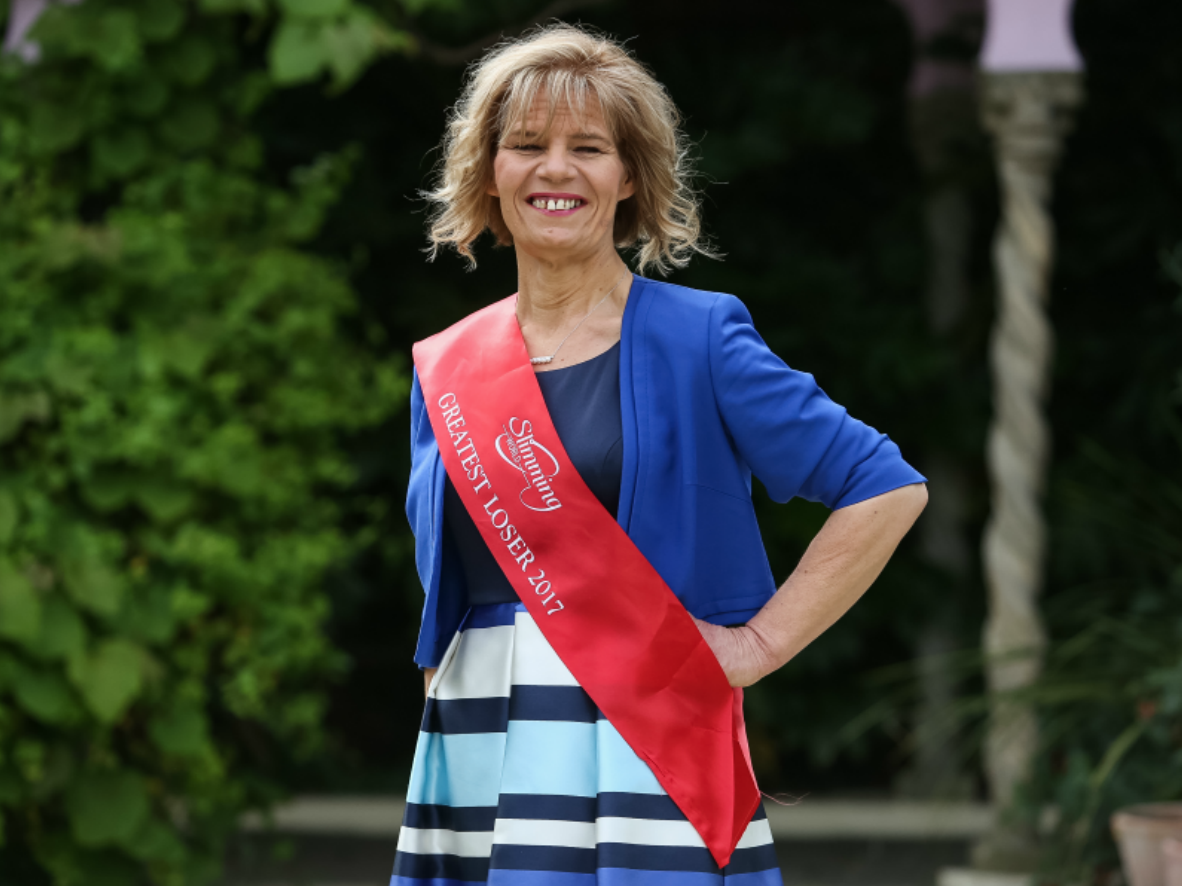 Her message to other people who may be scared to take that very first step?

“There’s nothing to be ashamed of; we’re all in the same boat. Try and stick with it. It will definitely work — and it will make you a lot happier.”

Maintain Your Weight Loss by Turning on Your ‘Stay-Slim’ Hormone

Lose 15 Pounds in 21 Days With This Coffee Cleanse