While a chubby cat or dog may look adorable, obesity is a serious health problem many pets face. In fact, a study by Banfield Pet Hospital, a national chain of pet health clinics, found that obesity was the second most prevalent health problem in domesticated animals. But for one overweight — yet adorable — dog named Strudel, weight problems are now a thing of the past.

Earlier this year, Strudel was sent to Hearts for Hounds, a nonprofit rescue group, after the death of her elderly owner. Weighing at almost 81 pounds, Strudel was obviously in pain and suffering from weight-related issues such as inflamed joints.

This obese pooch, however, is on her way to recovery. Once Kristy and John Cotthaus, owners of the dog training business Zoom Room, in Virginia Beach, Virginia, heard about Strudel’s condition, they knew they had to help.

In hopes of helping poor Strudel, the Cotthauses offered to train her in their facility for free. And despite her size, Strudel was a natural.

“We motivate dogs with treats, toys and praise, but Strudel was actually easy. It’s almost like she knew what she had to do,” Kristy Cotthaus told the Huffington Post. “We didn’t have to use any treats at all because she was motivated to do the agility [course] with just lots of praise.”

Hearts for Hounds’ volunteer Kristen Horton agreed to be Strudel’s foster owner until she found a suitable living situation. 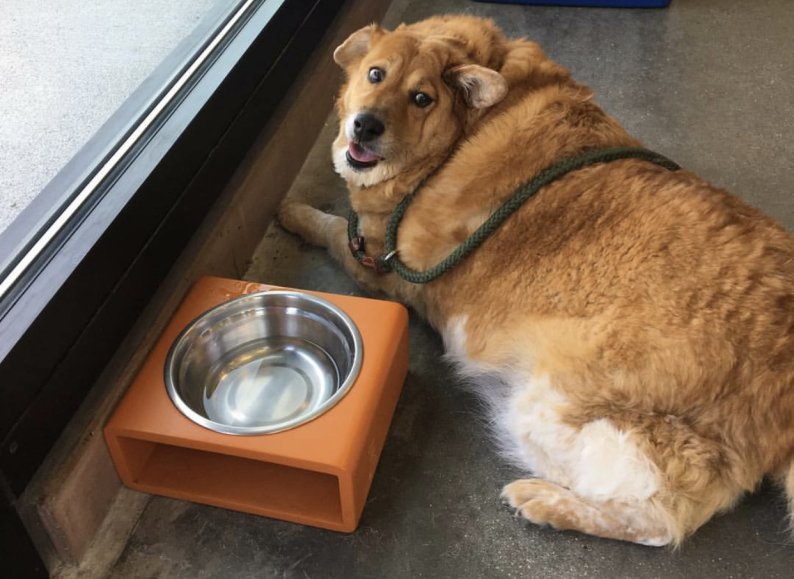 “Strudel is the sweetest animal we have ever met,” Horton said in an email. “She is calm, friendly, loves to play, snuggle, and walk, and is well-trained … Think gentle giant (though not so giant anymore!!)”

According to Horton, after losing just 25 pounds, Strudel is already more energetic than ever. Strudel was actually so energetic that her previous foster owners said they could barely keep up with her.

Just look at how much healthier she looks now!

“She had lost enough weight that she was fast enough to antagonize their cat, so she came to us at the end of August,” Horton added.

Even though Strudel’s cat-chasing hobby has been outed, Horton said Strudel loves to play with other dogs and would do well in a home with kids who could “keep her activity up.” Horton also added that Strudel would require a dedicated owner, someone who could commit to a regimen that included a lot of exercise and special foods.

Despite her specific needs, Horton noted that Strudel has already overcame one major challenge: losing weight, which has allowed her to get back to living a more normal dog life.

“She is a miracle of a pup so far,” Horton said.

This Thanksgiving, Strudel made 17-year-old Skylar Gray’s holiday weekend even sweeter. Before meeting Strudel, Gray had been struggling with mental illness and loneliness.

“She makes me want to get out of bed,” Gray told The Virginian Pilot. “We’re helping each other,” Gray said of Strudel’s recent weight loss. The Gray family said they hope to help Strudel meet her new goal weight of 45 pounds.

“I believe that God worked it out to make it happen with Strudel,” Skylar’s mother, Stephanie Gray said. The dog offers Skylar “unfiltered love.”

It looks like Horton was right, Strudel really is a miracle pup.