It looks like fairytales do come true. In 2017, The Gentle Barn in Santa Clarita, California — a sanctuary that rehabilitates animals from severe neglect and abuse — rescued an eight-week-old bull from a slaughterhouse and brought him home to a loving family. Due to the bull’s gentle nature and sweet disposition, volunteers decided to name the little guy Ferdinand, after the gracious bull in the children’s book The Story of Ferdinand. Once sweet Ferdinand became acquainted with the other animals at his new home, he and a very maternal, nurturing cow named Lucy formed a very special bond — one that came as a shock to the staff.

Once sweet, little Ferdinand becamse aquainted with the other animals at The Gental Barn, he and Lucy the cow — one of the more motherly figures of the animal sanctuary — formed a very special bond.

“The first time Lucy saw Ferdinand, her face softened, her heart opened, and she loved him right away,” Ellie Laks, the founder of The Gentle Barn, wrote in a blog post on the sanctuary’s website. “She introduced herself and went straight to work grooming him and staying by his side. It was love at first sight for both of them, and we were all deeply grateful to Lucy for being willing to care for him.”

Lucy soon became like a mother to Ferdinand. So much so, she began producing milk to feed the young calf!

“This was by far the most miraculous thing we have ever seen!” Laks wrote. “When I first saw Ferdinand nursing with Lucy, I thought he was just playing around down there, but as I watched Ferdinand continued to nurse for an entire fifteen minutes. Lucy patiently held still and quiet for him, every now and then letting out one of her soft moos meant just for him. Lucy has officially become his foster mom in every sense of the word!” 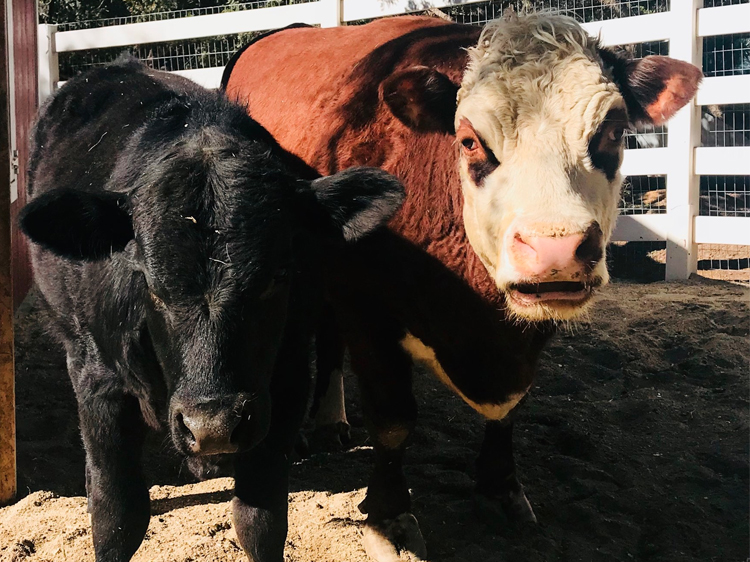 Shocked by Lucy’s immediate taking to Ferdinand, Laks did some research, only to find that this kind of thing happens all of the time — and there’s a simple explanation for it. Thanks to the “love hormone” (oxytocin), Lucy was able to induce lactation.

“I’ve worked with many adoptive moms and induced lactation,” one lactation consultant, Chrisie Rosenthal of The Land of Milk and Mommy, told Laks. “That ‘glow’ that you saw on Ferdinand and Lucy’s face was the effect of oxytocin (‘the love hormone’). The hormone that both mom and baby receive during nursing; which cements their bond even more. The act of breastfeeding involves an exchange of DNA, so Lucy and Ferdinand are bonded on a cellular level now.”

Now, Laks is using Ferdinand’s “adoption” as a way to inspire others to stop and think before they judge a “bull” by its cover. How sweet is that? We’re so happy Ferdinand has his new *caretaker to mother him and keep him company.

Watch the heartwarming video below to see the moment Lucy adopted Ferdinand as one of her own:

Meet Jolene, the Labradoodle Who Tried to Protect Her Family From Herself