There’s nothing as disgusting as stepping in dog poop while you’re out on a walk. So when we saw this sign designed to make dog owners pick up their dog’s mess, we had to laugh!

The sign, spotted by Julie Murden from Cambridgeshire, England, went viral thanks to its funny message. Her post on Facebook was shared more than 60,000 times. The poster, which she discovered stuck to a tree, says: “Want to start yoga? Start by bending over and picking up your dog poo known as the ‘downward dog position,’ THEN PUT IT IN A BIN.” 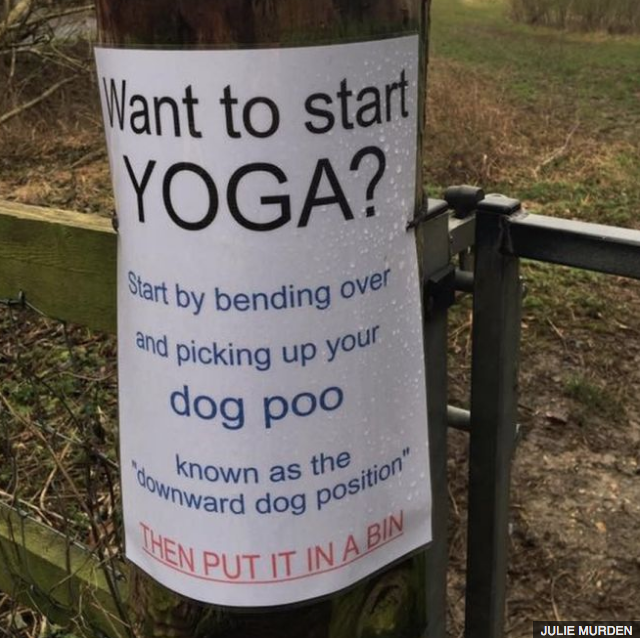 Julie the BBC, “I was quite surprised it had so many shares, and [it has] has apparently reached Dubai and Italy.”

She doesn’t know who made the poster, but she liked that it had humor and serious message, especially because the path the sign was on is used by children on their way to school.

According to the most recent numbers from the American Veterinary Medical Association, more than 43 million households in the U.S. own dogs — that’s a lot of poop! The current law states that dog owners can receive a $250 fine for not picking up after their pooch. Dog owners can also end up in court for the offense.

You can report irresponsible owners to your local law enforcement. The only exceptions to the rule are people with mobility or sight disabilities. Working dogs are also unlikely to be fined while on duty.

You’re Not Crazy, Dogs Really Do Know When to Turn on the Puppy-Dog Eyes