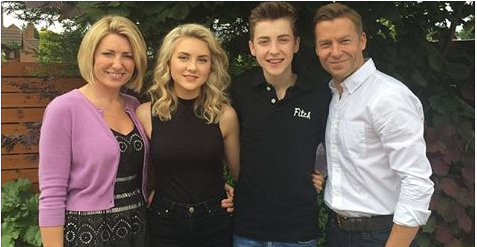 Andrea Henson spent 25 years of her life dealing with horrible weekly migraines. A mother of two and catering business owner, she often had difficulty with both of these jobs due to the serious pain. But finally, at age 46, she’s discovered the root of the problem, and has weeded out those nasty headaches!

Her migraines ranged in severity, but had landed her in the hospital on at least one occasion. She told DailyMail.co.uk, “My episodes were always unpredictable; they could come on quickly and affect my vision or be a slow starter, lasting anywhere between one to three days. I was left feeling exhausted and achy, but there was nothing anyone could do. As I run my own business, I had to try to soldier on the best I could. It was really hard.”

SEE MORE: Mom of 3 Was Always Tired. Years Later, She Was Finally Given A Diagnosis That EVERYONE Should Be on the Lookout For

She was prescribed migraine relief tablets, but was only allowed to take them four times per month due to their strength. As a result, she often had to suffer through the painful migraines to save her medication for the excruciating ones. And even when she could take the prescription, it had its own unpleasant side effects, like drowsiness and queasiness.

Andrea came across the solution to her migraine problems by accident, when she decided to learn more about food allergies and special dietary restrictions to help her with her catering business. To do so, she used YorkTest, a food allergy and intolerance testing service. She said, “I thought it would be the perfect opportunity to gain a deeper insight into different sensitivities for the business, while also looking deeper into my family’s health by getting my husband and children involved and taking a test with me.”

The test revealed that she had intolerances to cow’s milk and corn. Little did she know, those two simple foods had been the cause of her migraines all those years. According to Dr. Gill Hart, the Scientific Director of YorkTest, foods that cause consistent negative reactions in the person eating them are known as “trigger foods.” By eliminating them from your diet, you can eliminate those adverse effects and improve your quality of life.

RELATED: How to Cure a Migraine in 7 Easy Steps

The family immediately jumped into action, erasing those foods, as well as other foods that her husband and children showed intolerances to, from their diets. And while the results didn’t happen immediately, they were better than Andrea could have ever dreamed of. She said, “Since starting my new eating regime, I’ve gone from having migraines on a weekly basis to having just three in total–they pretty much disappeared after six weeks. I was amazed. Migraines used to be a normal part of my life. Now I finally feel I am normal for not having them.”

Now, if you’re also looking to make some changes to your diet to help you feel better, try starting with some of these healthy snacks!